Flutter Could Be the Best Solution for Mobile App Development 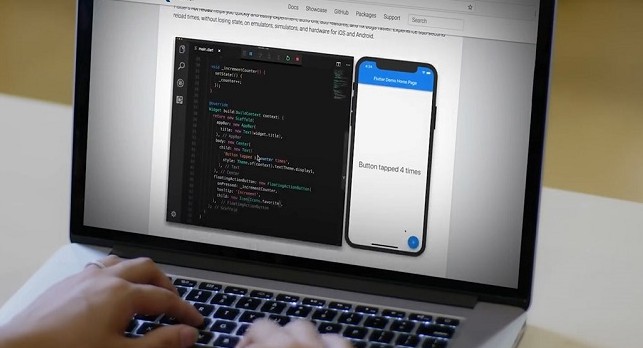 It’s common knowledge that Java and Objective C are the major pillars that are used to carry out quality Android and iOS app development. Most developers rely on these programming languages to deliver robust apps to the clients.

However, since Flutter came into the picture in May 2017, almost every other developer and app development company has switched to this advanced mobile app development technology.

Flutter is Google’s user interface (UI) toolkit used for crafting beautiful, natively compiled apps for mobile, web, and desktop from a single codebase, according to the tool’s product page.

The introduction of Flutter has become a boon for the mobile app development industry because, among other benefits, it has eased up the process of building cross-platform apps.

The Benefits of Flutter App Development

Many developers claim that they find Flutter the most promising platform to make their carrier with. Additionally, you can now find many reliable Flutter app development companies facilitating businesses with ultra-modern, multi-platform mobile applications.

We can’t predict the future, but Flutter has become a robust platform that’s helping developers build powerful mobile apps for both Android and iOS. The technology is combined with a reactive modern framework that allows app companies to build impressive animations, shared codebase, and views over Android and iOS platforms.

The aforementioned benefits already prove that Flutter will stay in the industry for long. But those are not the only benefits that reassure us the future of Flutter and mobile dev is bright.

Here’s more of the impressive features and scope of Flutter technology you should know.

1. Flutter is Powered by Dart

Flutter is the only option that uses Google-developed Dart language. Dart is a fairly different programming language; the only aspect that makes it similar to Java is the usage of syntax.

Additionally, with the support of asynchronous operations, developers are able to execute the codes that consume time to complete without freezing the other running codes.

2. Option to Write Once and Use Multiple Times

Creating separate codes to develop Android and iOS apps is time-consuming, which also requires a lot of developers’ efforts. When you use Flutter, you’ll get access to a single codebase that allows developers to build an app for both Android and iOS platforms.

Flutter is combined with different UI components and widgets that make an app more effective and powerful in terms of functionality. This relatively new app development technology and framework aims to solve all user interface problems.

There are different UI widgets available for developers to use, including Column, Row, and Container that help an app look appealing.

And to put app content in a systematic way, there are widgets named Text and RaisedButton. If you want to have a functional yet engaging app, these Flutter UI components come in very handy.

An extensive number of libraries are available to support Flutter and Dart development. Thus, Flutter is emerging as the best development framework to build robust cross-platform applications, and also facilitating the app development industry with out of the box libraries.

So, if you want to put ads in your app, you’ll get a library for that and if you want new widgets, there’s a suitable library to integrate that, as well.

Many app development companies consider Flutter the best dev solution to create super fast mobile apps that render consistently. The reason for this is because Flutter uses neither WebView nor the OEM widgets that shipped with the device.

Instead, Flutter uses its own high-performance rendering engine to draw widgets. Moreover, Flutter renders incredibly fast because it also only has a thin layer of C/C++ code.

In addition, as already mentioned, Flutter uses Dart programming language, which has been shown (and recommended) to create high-performing and secure apps.

Conclusion
App development possibilities using Flutter are endless, owing to its extensive UI widgets, its own high-performance rendering engine, and most importantly, it runs on Dart.

Flutter really has made it easy to create powerful mobile apps and streamline development using a single language and the same platform.

If you are thinking about building an app for iOS, Android, Windows, Mac, Linux, Google Fuchsia and the web, Flutter is a great option to consider. Experts in app development who have used Flutter consider it a shining star for the entire app development industry.