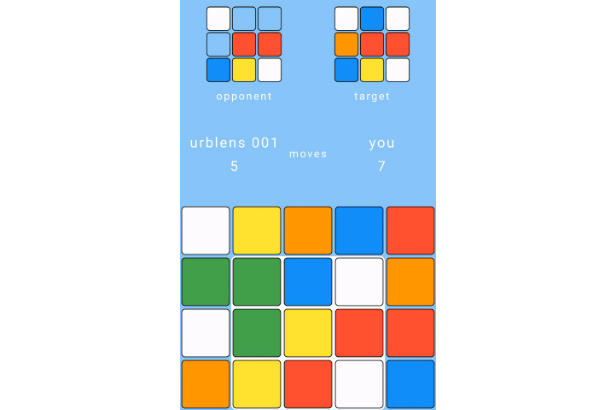 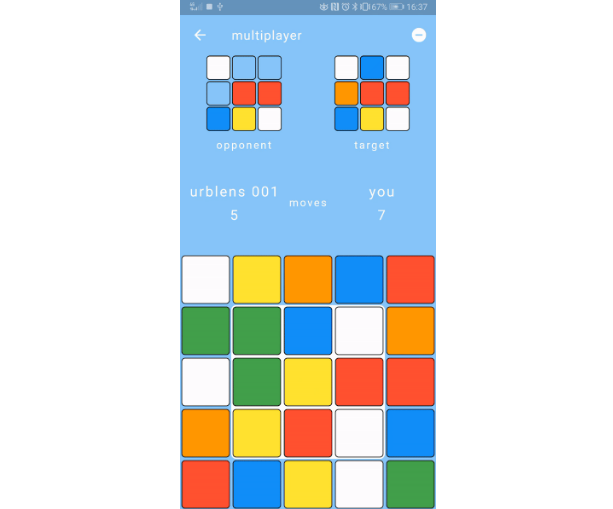 The goal is to reproduce the top right pattern on the 9 center squares with as few moves as possible.

Fun fact: this app was entirely developed on emacs!

This app implements Didier Boelens’ approach to BLoC.
The idea is to show data through widgets that react to a bloc’s Stream.
In order to simplify state management, I’ve also implemented EventStates:
blocs that emit a new widget’s state based on an event.

Multiplayer is handled by Firebase. A Firestore database stores all matches, queue and users
information and all endpoints are Firebase Functions written in Typescript
(project under directory functions).

When a player looks for a new match, he’s put in a FIFO queue and joins a match as soon as an opponent
is found. A common target is chosen for them and whoever reaches the goal with the fewest amount of
moves wins.

Players can leave a match at any time and reconnect later. Active matches are stored on the device
thanks to sqflite.

Players can forfeit a match. This immediately triggers a win condition for the opponent.

Notifications are handled by Firebase Cloud Messaging. Every time a player is challenged, or an opponent plays a move, both players are notified.

If you want to use the online component, you can create a new Firebase project,
create your own google-services.json and put it under android/app.

The app comes with a sqflite db of 500 combinations of target fields + game fields. A random
combination is chosen.